Is the Bible true?

Why? if there is archeological evidence that these things happened and nothing is invented, then the Bible is true and the Word of God. I think this is an interesting subject to show unbelievers that historians, scientists, people make mistakes but not God. I will show that there is enough archeological evidence to prove that the Bible is true and you should take it seriously.

I will begin with the story of Joseph in Genesis.

In Goshen at a major archaeological site encompassing Middle Kingdom Hyksos and New Kingdom cities, the Austrian expedition under Manfred Bietak has uncovered a great deal of archaeological evidence of Asiatic habitation.

The ruins of Avaris indicate a crowded, densely populated city with narrow streets and alleys and mud-brick construction. At the site, pottery, weapons, and architecture of the Levant was discovered, indicating Asiatic settlement. Some of these Semites were slaves, making mud bricks for building, mining, working in the fields, and serving in households just as we see various Israelites doing during their time in Egypt.

The Israelites mainly settled in Goshen, so agricultural work was likely one of their jobs, and it is also possible that some of them worked in the seasonal mines.  As for evidence that is more specific to the Israelites, the Brooklyn Papyrus lists almost 30 slaves with northwest Semitic names, several which are even Hebrew.

And Joseph said unto his brethren, and unto his father's house: 'I will go up, and tell Pharaoh, and will say unto him: My brethren, and my father's house, who were in the land of Canaan, are come unto me; and the men are shepherds, for they have been keepers of cattle; and they have brought their flocks, and their herds, and all that they have.  And it shall come to pass, when Pharaoh shall call you, and shall say: What is your occupation? that ye shall say: Thy servants have been keepers of cattle from our youth even until now, both we, and our fathers; that ye may dwell in the land of Goshen; for every shepherd is an abomination unto the Egyptians.'

In the site was found a temple with semitic statue made for a very important not egyptian leader who ruled in Egypt, that was not the custom. Near to the temple 11 graves, 11 brothers of Joseph

This is a reconstruction of the very important semitic leader of Egypt in Goshen being Joseph. Watch his coloured cape as described in Genesis given by his father Jacob.

This is some of the evidence found about the Israelites who lived in Goshen and Joseph. There is ofcourse more.

I will follow up with the story of Moses and it's evidence. The 10 plagues is something that most have been witnessed isn't it? Well it is.

The Ipuwer Papyrus is an ancient document that provides a possible independent record of the ten plagues in Egypt. It describes a great disaster that took place in ancient Egypt. The oldest copy dates to around 1400 BC, placing it close to the time of the Exodus (circa 1446 BC). The Ipuwer Papyrus is the sole surviving manuscript of an ancient Egyptian poem officially designated as Papyrus Leiden I-344. The poem is known as "The Admonitions of Ipuwer." A new edition is available now entitled "The Dialogue of Ipuwer and the Lord of All." Dutchman Giovanni Anastasi purchased the Ipuwer Papyrus in 1828, and it is now housed in Leiden, the Netherlands, at the Dutch National Museum of Antiquities, the Rijksmuseum van Oudheden. 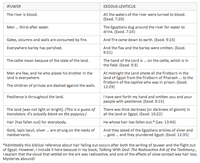 Egyptologist David Rohl, who doesn't claim to be a Christian, has written two books on how biblical accounts relating to Egypt, Joseph, and Moses are astonishingly accurate. He believes Joseph and Moses were historic characters and cites Bronze Age slave lists containing Hebrew names, the grave goods of an underclass discovered at Avaris (the biblical Goshen), and Egyptian "plague pits" full of skeletal remains.

While the Bible does not need confirmation from secular historians, and Christians do not require extra-biblical accounts in order to believe the Bible, it is interesting that independent records of biblical events exist-records with remarkable parallels to the biblical accounts.

There is a problem in the Egyptian chronology because this defines the dates of all nations in the middle-east.

Rohl shifts the Israelite Sojourn, Exodus and Conquest from the end of the Late Bronze Age to the latter part of the Middle Bronze Age (from the Nineteenth Dynasty to the Thirteenth/Hyksos period). Rohl claims that this solves many of the problems associated with the historicity issue of the biblical narratives. He makes use of the archaeological reports from Avaris, in the eastern Nile Delta, which show that a large Semitic-speaking population lived there during the Thirteenth Dynasty. These people were culturally similar to the population of Middle Bronze Age (MB IIA) Canaan. Rohl identifies these Semites as the people upon whom the biblical tradition of the Israelite Sojourn in Egypt was subsequently based.

Now after Moses there was the conquest of Joshua of the Promised land.

The Battle of Jericho, described in the book Joshua is the terrific account of the Israelites' return to the promised land from bondage in Egypt, led by Joshua, the successor to Moses. Archaeological evidence indicates that Jericho was a prosperous city with food and water, and a wall of protection that was impenetrable. Is there archaeological proof that backs the account found in the book of Joshua of Jericho?

And one very interesting fact is that the whole city was destroyed but just one side of the wall with houses remained free from destruction could it be Rahab's story?

And the city shall be devoted, even it and all that is therein, to the LORD; only Rahab the harlot shall live, she and all that are with her in the house, because she hid the messengers that we sent. 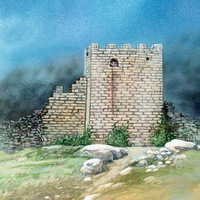 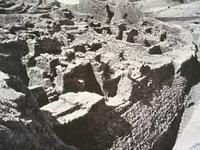 Is this a coincidence too? Do you need more evidence to believe this wonderfull book inspired by God? And i didn't even started yet with all the patterns, prophecies and archeleogical truth.

Let me tell you something, if you are in love with someone and that person asks you, proof me your love i want evidence. How will you do this? Or if your grandmother dies and you are hurt but you don't cry, and your brother tells you that you have no feelings, no pain. How can you proof this? How can you show what is inside you, how can you proof what you feel?

That is the same with God. He is there, he is in you, if you trust and believe in Him and in his Gospel. What are the fundamentals of a relationship? First believe and trust and love.